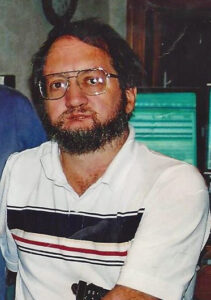 Steven Keith Pribbenow, age 64, of Baraboo, Wisconsin died Wednesday, October 7, 2020 at home with his family by his side.

Steve was born February 20, 1956 in Madison, Wisconsin to Arnold W. and Jeanne(Bakke) Pribbenow.

Steve lived in Madison at the beginning of his life and then spent his early years in McFarland before moving to Baraboo where he went to high school and was a member of the varsity wrestling team. He attended UW Madison for Genetics before being stricken with Crohn’s Disease and had to give up finishing his education. He was a disability rights activist for his entire life and enjoyed educating police forces, legislators, and the public about the American’s with Disabilities Act as well as being the leader of the Sauk County Disabled Parking Enforcement Council.

Steve enjoyed cabinet making, furniture building, and other woodworking projects. He also enjoyed fishing and traveling. He was very skilled at fixing just about anything especially computers. He enjoyed helping elders set up and learn to use computers and access the internet.

He will be laid to rest at Greenwood Cemetary with his father and sister after a private family service.

Steve was preceded in death by his father, Arnie; his sister, Lynn Marie Kivi; his uncle, Lynn Bakke, and both sets of grandparents.

He is survived by his mother, Jeanne; his life partner, Tammy Wajda, and her children Lonnie Riddle (Gina), Jessica Riddle, and Candice Wajda. Also, grandchildren Natasha and Gary Barton, Jr; and Finn and Evie Riddle. He is further survived by his sister’s children Sarah and Chuck Kivi.