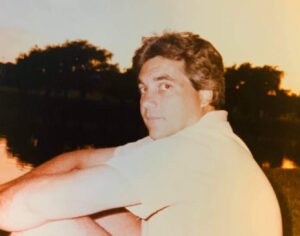 Thomas was born on August 6, 1953, in Chicago, Illinois to Hugh and Adele Dorsey. He attended Maine West High School where he was a member of multiple sports teams and found his love of golf.  Following high school, Thomas attended Southern Illinois University at Carbondale.  He graduated with a Bachelor of Science and Administration of Justice.

Thomas was employed by Sears Roebuck and Company where he was a loss prevention manager.  This is where he met Kelly and their love story begins.  Tom and Kelly were married on March 17, 1990, in Schaumburg, Illinois.

In May of 1996, Tom and Kelly became the proud owners of Bay Rest Resort in Monroe Center, Wisconsin.  They together recently celebrated 24 years of business at Bay Rest.

Tom enjoyed golfing, fishing local lakes in Wisconsin, and his yearly trip to Canada with his father Hugh and his brothers.

Tom was a proud Chicago Cubs, Chicago Bears, and Chicago Blackhawks fan.  Whether it was on T.V. or live at Soldiers Field you could always see him cheering for his teams.

Tom was past president for Adams County Tavern League and 5th district director for over 8 years.  He was also president of Monroe Center Winter Pals for many years.

Tom loved visiting Ireland with his wife Kelly, loved learning about his Irish heritage and he always told the most interesting stories of his childhood, youth, love of his life, and family.

Tom will be missed by all his close friends and Bay Rest family.

“May you be wrapped up in God’s love, found deep in his everlasting wings, carried and kept, safe and cherished. May the healing power of Christ breathe across your being now”.  Amen.