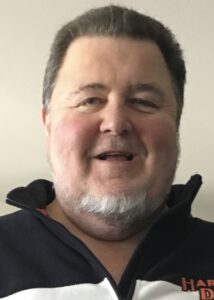 “On 01/01/61 a bundle of joy was brought into this world” born to Henry F. and Mary V. (Bennett) Frisch. Tuna grew up in Mauston and attended Mauston schools.

Tuna met his “Cupcakes” Sherry Stieve in 1983 and was married on the Colorado River in Laughlin, Nevada.

Tuna owned and operated Heinie’s Tavern in Mauston which was a family business since 1953. Tuna enjoyed his work as he was loved people. Tuna’s main goal in life was to put a smile on everyone’s face and brighten their day. He had a repertoire of jokes and he wanted to get to know everyone in the room.

Tuna was very active in the Tavern League of Wisconsin since age 18 (40+ years) active on the State Board of Directors much of the time; also serving Juneau County Tavern League locally as president and various positions. Tuna was a true worker/supporter for the TLW. His vacations were Tavern League events and Conventions. He loved golfing and supporting fundraisers. Tuna also enjoyed the high school wrestling program which he still shares stories about to this day.

No services will be held. Inurnment at Walnut Hill Cemetery.