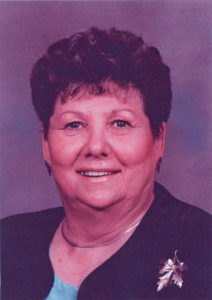 Memorial services will be 3:00 p.m. on Saturday, August 10, 2019 at the Roseberry’s Funeral Home in Friendship, Wisconsin. Pastor John Stake will officiate. Interment will be at the St. Leo Catholic Cemetery, Friendship, Wisconsin. Visitation will be at Roseberry’s Funeral Home on Saturday, August 10th from 2:00 p.m. until the time of service.

Virginia was a very talented lady. She had a love for painting, ceramics, sewing, bird watching, playing cards, bowling, and making flower arrangements. She built beautiful holiday scenery’s during her volunteer work on the auxiliary creative team for the Town of Rome, WI and in her homes in Addison, IL and Lake Camelot, WI.

Virginia started working at a young age of 15 at Hamburger Heaven in Elmhurst, Illinois. She went on to work at many companies; State of Illinois Dept. of Crippled Children Division, Mars (Wrigley) Confectionary, Maryknoll College, Gallant Home Builder, and in tandem started up and then lead the CCD educational program at St. Philips The Apostle Church in Addison, IL for many years. She went into semi-retirement when her and her late husband (Fredrick Noelle) moved to Lake Camelot WI in 1986 where she was the manager of the Lake Camelot lodge until full retirement in 2005. In 2006 she moved to Huntley, IL to be closer to her daughters. Virginia passed peacefully surrounded by the love and prayers of her family. She is finally reunited with her loving husband Fred, who has been patiently waiting to travel the Heavens, side by side.

No farewell words were spoken. No time to say goodbye, you were gone before we knew it, and only God knows why.