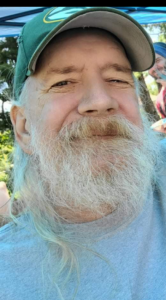 We will be holding a remembrance of life wake at Viking Lanes in Stoughton on Saturday, September the 24th starting at 11:30 am until whatever time. Please, friends and family, join us!

Bill was born June 28, 1960, in St. Louis, Missouri to William Ellsworth and Diane Alvenne (Roseberry) Fretwell. He attended school in Adams-Friendship before moving to Tulsa where he worked as a chef. Later he returned to Wisconsin, living first in Madison then moving to Stoughton with his second wife, Candy and two children. After her passing and due to declining health, Bill moved into Skaalen House, where he was ‘adopted’ by many of older residents and often spent time watching DVDs with his ‘ladies’, the older women he shared a dining table with.

Bill enjoyed fantasy football and collected trading cards and coins as well reading thrillers and watching comedy and detective series from the 70s and 80s. He often played mobile games on his phone and often helped with the bingo games at Skaalen House as well as occasionally cooking in the small cafeteria.

Memorials may be directed in Bill’s memory to Agrace | Hospice & Supportive Care. Direct donation can be made at: Donate to Agrace.

William was preceded in death by his father, William; mother, Diane; and wife, Candy.