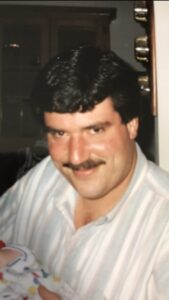 William Howard “Bill” Hommel III, age 55 of West Baraboo, Wisconsin passed away peacefully in the very early morning hours on July 15th, 2020 at the SSM Hospice House in Baraboo, Wisconsin following a 4 month battle with pancreatic cancer. Bill was born on November 5th, 1964 in Baraboo to then Mayor Dr. William H. Hommel, Jr, and Shari H. (Werner) McKee. Bill attended Baraboo Sr. High school as a member of class of 1983.  Following his completion of high school, he served several years as an EMT on Baraboo District Ambulance Service. He attended MATC and received an associate’s degree in electronics. Later in life, he married Cathy Brown Root on Lake Monona. He worked at JT Packard in Verona for many years, before his return to Baraboo. He was recently employed at Flambeau, Inc. as an operator. Bill enjoyed music! He attended many concerts throughout his life, and those who knew him, know of his love for the band Rush. Anytime a Rush song came on, Bill could be seen playing “air drums.” His final hours were spent with his sisters and friends listening to Rush music. Bill also had a love of the water. Some of his favorite memories growing up are from the many summers spent with family and friends on Castle Rock Lake. He also loved fishing and treasured his trip to Canada and the trophy northern that he caught. Bill was a member of the Yellow Thunder Ham Radio Club. He was a self-described amateur radio “geek” and loved to talk to people around the world, and even talked to the astronauts on the space station. Bill was preceded in death by his parents and grandparents. He is survived by his sisters, Heidi (John) Traxler, Baraboo, Holly (Doug) Lindsay, West Baraboo, former wife Cathy Brown Root of Madison, Step Mother Joyce (Smith) Hommel of Black Creek, Step Sister Stacey (Parker) Brooks also of Black Creek. He is further survived by nephews Justin (Breona) Bennin, Jed (Hilary Mueller) Traxler, Jameson Traxler, and Wyatt William Brooks, Niece Airman First Class Alexa Lindsay (USAF), and many lifelong friends. A memorial service will be held at a later date. Memorials may be directed to the SSM Hospice House, Baraboo. The family would like to thank Dr. James Heun, Maggie Laukant NP, and the wonderfully caring staff on St. Clare Hospital 2W, and the SSM Hospice House. We couldn’t have gotten through this without them. Roseberry’s Funeral Home of Friendship is assisting the family.

“Fly by night, away from here
Change my life again
Fly by night, goodbye, my dear
My ship isn’t coming and I just can’t pretend”
~ Neil Peart & Geddy Lee